Loops enable you to define groups of statements that need to be executed several times (for example, while n<10). In C++, there are three important types of loops: while, do-while and for loops.

I believe that "while" is the simplest type of loop offered by the C++ programming language. The syntax of this statement is given below: 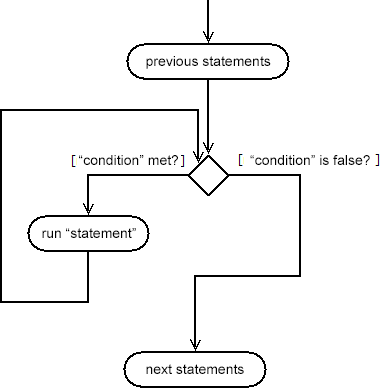 At the beginning, the variables i and s have the values 1 and 0, respectively. Then, because the condition (1 <= 5) is satisfied, the statements inside the block will be executed ("Adding 1." will be printed, the value of s will increase by i=1, and then the value of i will be incremented by 1). Now, instead of going to the statements that are below the block, the loop condition is checked. Because the condition (2 <= 5) is satisfied, the program executes the statements in the block again (prints "Adding 2.", increases s by i=2 and increments the value of i). Each of these runs (for i=1, i=2, etc) is called an "iteration" of the loop. The statements inside the block will be executed three more times (for i=3, i=4 and i=5), after which the condition (6 <= 5) will no longer be satisfied (6 <= 5 has the value false), and so the loop will terminate. Finally, the program will print the value inside the variable s - which represents the sum of the first 5 natural numbers 1+2+3+4+5=15.

If, during the first check, the condition has a value of false, then the statements inside the block will not execute (not even once). For example, in the program given above, if (in the beginning) the variable i received the value 10, then the condition in the while loop (10 <= 5) would have evaluated to false, and the program would not have entered the block - instead, it would have jumped to the end and print "Sum: 0".

It is very important (so don't forget!) to update the variable/variables that are part of the "condition" expression. Otherwise, the program will always perform the same statements, and it will never complete. It is your obligation to cause, at some point, a reason for the loop to end. In the program given above, this is done by increasing the value of the variable i. Since i is included in the condition expression (i <= 5), then at some point (when i gets a value greater than 5), the loop will end.

The following program demonstrates some of the things discussed above:

If you know exactly how many times a statement (or a group of statements) should be executed, then the best way to create a loop is to use the for statement. When I write programs in C++, the "for" statement is the one that I use the most (for writing loops). The basic syntax and an explanation of the steps that are executed by the system is given below:

The steps that are carried out by the system are: 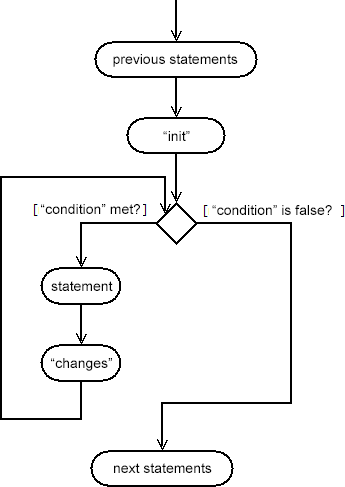 The following program demonstrates what we discussed previously:

From the example given above, it can be seen that all three sections (init, condition and changes) are optional (i.e. they can remain empty). In any case, the separation symbol ';' must be written between them. For example, if we decide not to specify the section "changes", we must write for(init; condition;), if we do not want to specify the section "init", we can write for(; condition; changes), etc.

Very often, we need to perform more than one command in the "init" or "changes" section. We can do this by separating the commands (statements) with the symbol ','.

Sometimes, when a certain event occurs, we want to exit a loop, or jump to the top of a loop (check the loop condition and continue from there).

The break statement allows us to exit a given loop at any point, without even checking the main "condition" on top of the loop:

The program given above prints 15 because that is the sum of all integers between 0 and 5. Although the condition on top of the loop indicates that it should run for all numbers from 0 to 9 (9 < 10), the program will calculate the sum (in variable s) of numbers between 0 and 5 (and only those). The loop will end when the variable i gets a value of 6. At that point, the break statement will cause an early completion of the loop.

This statement allows us to use "infinite loops" - i.e. loops that do not have a defined condition for the loop, or the condition is defined in such a way that it is always fulfilled:

The continue statement, on the other hand, triggers a premature end to the current iteration of the loop - in for loops, this means executing the "changes" section and jumping to the "condition" section (i.e. checking if the loop should run again), and for while loops, it means jumping to the top and checking the condition.

The following program illustrates how to use the continue statement: