When we write programs and various software solutions, we often come across situations where we need to count objects or states that meet a certain criteria. Most often, we do this by calculating the required number directly. However, there are situations when it is actually easier to calculate the number of objects or states that do not meet the required criteria, and then subtract that number from the total number of objects or states. For example, if we need to calculate how many people in the United Kingdom are currently free (not incarcerated), we can infer that it is better to determine the number of people currently in prison, and then subtract that number from the total population according to the latest census. We do this because the number of prisoners is easier to determine - it is much smaller, and we should be able to retrieve it by contacting each facility where sentences are being served. 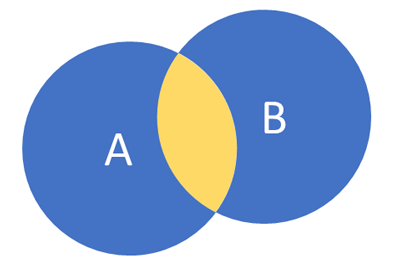 The inclusion-exclusion principle enables us to solve similar problems even when we have more than two sets - so, for example, to calculate the number of elements in a union of 3 sets (named A, B and C), you need to calculate the sum of all these values (note the sign, + to add, and - to subtract):

You can also see this on the picture given below. 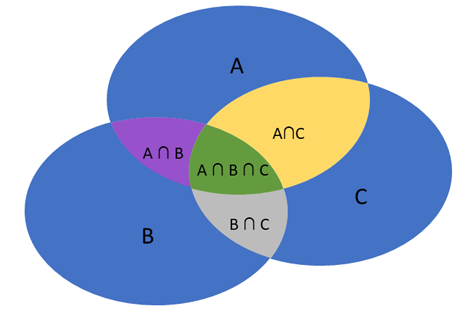 Note that (in this post) we are talking about the principle of inclusion (+) and exclusion (-), and we have already mentioned why it is necessary to create all viable subsets of a list (for example, A, B, C). Now, it's time to see how they can be (efficiently) generated with the help of a computer. In fact, this is a problem that we have already discussed in one of the previous posts, and the simplest way to solve it involves looking at the bits of an integer. Specifically, if we have a list of N elements (A, B, C, D, ...), then there are 2N subsets of this list.

Now, if we know that there are 2N subsets, we can use one "for" loop that will go through all integers from 0 to 2N-1, and those integers (written in binary) look like this (this is an example where N=3):

The next program will print all subsets (A, B, C, D, etc.) for a given number of elements N.

The last thing that we will mention in this section is that the condition ((1 << j) & i) != 0) checks if the j-th bit (from right to left) in the number "i" is equal to 1. In other words, with (1 << j) we get a number that has only one bit set (at position j), and then with the help of the AND (&) operator we check (bit by bit) which bits in both numbers are equal to 1. Since there is only one bit in the number (1 << j) that is equal to 1, this calculated value will be different from 0 only when the bit at the same position in the number "i" is also equal to 1.

In the previous section, we indicated that the inclusion-exclusion principle is based on the idea that some problems where we need to calculate the number of elements in a union of sets can be solved using the count of elements in the sets themselves and the number of elements in their intersection. We talked about how we can create all viable subsets (which we need in order to calculate the intersections), and how to decide if a subset will affect the final result positively (inclusion, with a plus sign), or negatively (exclusion, with a minus sign).

In fact, we have thoroughly explained the principle, and how to use it. In addition, we already saw an example where it was used to count how many numbers are divisible by one or more primes (3, 5, etc.).

In this section, we will try to look at another example (much more complex than before) in order to better understand things. Don't worry if you don't understand everything, as this is a pretty hard problem.

Let's explain the problem that we want to solve. Initially, we have two numbers N and M, and we want to calculate how many numbers smaller or equal to N have no common divisor with M. We won't consider 1 to be a common divisor, because in that case the task makes no sense (all numbers are divisible by 1).

This task can be solved by applying the inclusion-exclusion principle. Specifically, the idea that we need to use comes from the example presented earlier (where we eliminated certain numbers like 8 and 9, with primes that happen to be divisors of both those numbers and M: 2 and 3). If we eliminate certain numbers when they have a common divisor with M, then the final result will be equal to N minus the count of such numbers. More specifically, if N=20 and there are 13 numbers that have a common divisor with M=6, then there are 20-13=7 numbers that do not have a common divisor. (If this is not clear to you, please look at the first few paragraphs of this post.)

Furthermore, in order to eliminate a number (by marking it as having a common divisor with M), it is sufficient to find just one number that is a divisor of both that number and M. The best idea here is to look at the prime divisors of a number, since any number greater than 1 can be represented by the product of its prime divisors.

The implementation of this idea for any integer N and M is given below.